Who Are The Controllers?

[Politics]
Who Are The Controllers?
By Mees Baaijen
Posted October 15, 2017 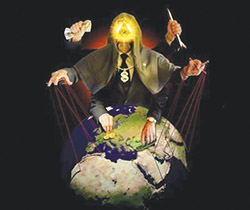 In the West, we’ve all been spoon fed the idea that we are free citizens of sovereign countries, where our democratically elected governments rule according to the peoples’ wishes. If that’s not achieved, it’s usually explained as being due to misfortunes such as crises, security threats or wars, or the stupidity of our governments. The few people that doubt these explanations, or even suspect hidden hands behind the occurrences of our time or the official narrative of our history, are easily dismissed as conspiracy nuts.

The banksters’ unimaginable power of deceit turned the truth upside down, making into heroes the very instigators of these destructive wars. How on earth did they manage that? Through control of the mainstream media, science and academia (in particular history and economics), the education system and the entertainment industry. That’s how they shape our perception of the present and the past, and that’s how the majority of people are kept in ignorance of these machinations. When the truth is finally heard, it’s difficult to grasp because the lies are so big, the scope so vast, and the real events of history so different to what we’ve been told. To wake up and accept the truth about the situation, and acknowledge we’ve been duped, most people go through the painful process of cognitive dissonance,9 which is like losing part of your identity. More…