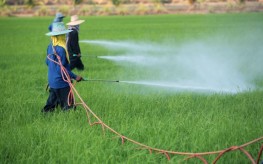 GM seed is neither more productive nor healthier than traditional heritage crops, and is far more expensive and destructive, but it presents almost irresistible military advantages against any nation that becomes dependent on this source of food grains. One is that the US can use it as a political weapon, refusing to supply seed to a disfavored nation, perhaps causing widespread famine and dislocation. The other is more sinister, in that many groups have experimented with gene-splicing technology, inserting unrelated DNA into various seeds.

The US Defense Department has invested huge sums in research directed to splicing lethal genes into these GM crop seeds, including smallpox, bird and swine flu viruses, coronaviruses, the plague, AIDS, and more. As a military weapon, such science is priceless. Why begin a shooting war when Monsanto or Cargill can sell rice, corn and soybeans that contain smallpox, H5N1, or a coronavirus? When the seed is harvested and passes into the nation’s food supply it could, within weeks, exterminate 50% or more of the population without firing a single shot.

And this was precisely the reason GM seed was conceived and developed by the Americans. It is a weapon of war, designed and meant to deliver to a nation’s entire population a lethal virus or other disease, to literally exterminate an enemy with no risk to the aggressor. More…