[Economic] [Justice]
$340 Billion of the $454 Billion that Mnuchin Was to Turn Over to the Fed is Unaccounted For
By Pam Martens and Russ Martens
Posted June 26, 2020 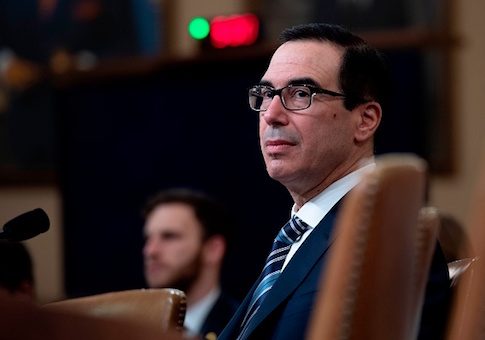 The stimulus bill known as the CARES Act was signed into law by the President on March 27, 2020. It called for “Not more than the sum of $454,000,000,000…shall be available to make loans and loan guarantees to, and other investments in, programs or facilities established by the Board of Governors of the Federal Reserve System for the purpose of providing liquidity to the financial system that supports lending to eligible businesses, States, or municipalities.” In addition, if the Treasury had any of its $46 billion left over that Congress had allotted in the CARES Act to assist airlines or national security businesses, that was to be turned over to the Fed as well.

The CARES Act was passed almost three months ago at the outset of the worst economic upheaval since the Great Depression. One would have thought that the urgency with which Congress acted to pass the legislation would have resulted in rapid deployment of the $454 billion to the Fed to help shore up the economy.

But according to data released this past Thursday by the Federal Reserve, the Treasury has turned over just $114 billion of the $454 billion that was allocated to the Fed by Congress. The Federal Reserve’s weekly balance sheet data release, known as the H.4.1, showed a line item titled “Treasury contributions to credit facilities” and it showed a balance of just $114 billion. More…