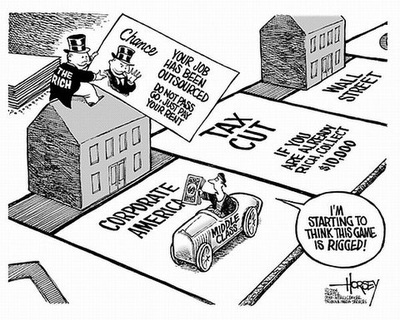 The competing systems of power in the United States are divided between oligarchy and autocracy. There are no other alternatives. Neither are pleasant. Each have peculiar and distasteful characteristics. Each pays lip service to the fictions of democracy and constitutional rights. And each exacerbates the widening social and political divide and the potential for violent conflict.

The oligarchs from the establishment Republican party, figures such as Liz Cheney, Mitt Romney, George and Jeb Bush and Bill Kristol, have joined forces with the oligarchs in the Democratic Party to defy the autocrats in the new Republican party who have coalesced in cult-like fashion around Donald Trump or, if he does not run again for president, his inevitable Frankensteinian doppelgänger.

The alliance of Republican and Democratic oligarchs exposes the burlesque that characterized the old two-party system, where the ruling parties fought over what Sigmund Freud called the “narcissism of minor differences” but were united on all the major structural issues including massive defense spending, free trade deals, tax cuts for the wealthy and corporations, the endless wars, government surveillance, the money-saturated election process, neoliberalism, austerity, deindustrialization, militarized police and the world’s largest prison system. More…