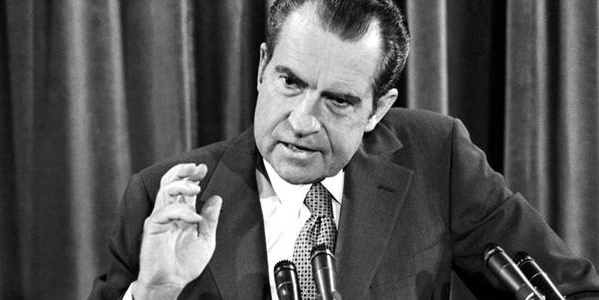 The dollar exodus had its beginnings way back in February 1965 when President Charles de Gaulle announced his intention to exchange its U.S. dollar reserves for gold at the official exchange rate of $35 per ounce.

Lyndon Baines Johnson was president. The War in Vietnam and Johnson’s “War on Poverty” accelerated the US deficit and inflation.

On a campaign that promised to restore law and order to the nation’s cities and provide new leadership in the Vietnam War, Richard Nixon won the election in 1968. Arthur Burns was Fed chair.

[Economic]
The Fed Is Offering $100 Billion a Day in Emergency Loans to Unnamed Banks and Congress Is Not Curious Enough to Hold a Hearing
By Pam Martens and Russ Martens
Posted October 12, 2019

The Federal Reserve Bank of New York first initiated its emergency overnight loans to Wall Street this year on Tuesday, September 17, starting off at the rate of $75 billion daily. It then increased its loans by adding, in addition to the $75 billion daily, 14-day term loans in the amount of $30 billion to be offered three times this past week. But after the demand for the first 14-day loan was more than double the $30 billion offered, the New York Fed boosted the next term loans to $60 billion and increased its overnight loans to $100 billion.

What will next week bring? When Wall Street can get super cheap loans from the Fed in the tens of billions of dollars with no questions asked by Congress, it will continue upping its demands until the Fed is once again secretly shelling out trillions of dollars while Congress willfully remains in the dark – in other words, a replay of the 2007-2010 financial crisis. More…

The Guide To Real History

In the last two centuries, all wars have been machinations orchestrated by bankers pursuing two very simple objectives: profit and a world domination that bears a name: the New World Order.

Before 1971, bank loans were based on their gold reserves, but no bank really owned the value in gold of the money it lent over the years, so the scheme wasn’t very different than today’s fractional system of money creation, in which banks have to own 1/10th of their loans. For example, if bank A has a million dollar, it can lend 10 millions to bank B, which can lend 100 millions to a country, since bank B owns 10 millions. This is basically how the world ended up owing 184 trillion dollars (184 000 000 000 000$) to private banks as of today.

If you doubt this private money creation scheme, just tell me where that money was before we owed it to them? I guess that settles it. More…

The Facts:
Banks literally create money “out of thin air” and then charge interest on that money. It is literally impossible to repay this borrowed money because the money to pay interest is never created, leaving people and nations deeper and deeper in debt.

Reflect On:
Until more people understand how money comes existence, we will never break out of the economic slavery imposed by the bankers.

For those who would like to learn more about money creation and who the system benefits, I would highly recommend the book “Web of Debt” by Ellen Brown. Disclosure: I receive no financial or other benefits from promoting this book. Central bankers are out of ammunition. Mark Carney, the soon-to-be-retiring head of the Bank of England, admitted as much in a speech at the annual meeting of central bankers in Jackson Hole, Wyo., in August. “In the longer-term,” he said, “we need to change the game.” The same point was made by Philipp Hildebrand, former head of the Swiss National Bank, in a recent interview with Bloomberg. “Really, there is little if any ammunition left,” he said. “More of the same in terms of monetary policy is unlikely to be an appropriate response if we get into a recession or sharp downturn.”

“More of the same” means further lowering interest rates, the central bankers’ stock tool for maintaining their targeted inflation rate in a downturn. Bargain-basement interest rates are supposed to stimulate the economy by encouraging borrowers to borrow (since rates are so low) and savers to spend (since they aren’t making any interest on their deposits and may have to pay to store them). At the moment, over $15 trillion in bonds are trading globally at negative interest rates, yet this radical maneuver has not been shown to measurably improve economic performance. More…

Are You Ready To Consider That Capitalism Is The Real Problem?

[Economic]
Are You Ready To Consider That Capitalism Is The Real Problem?
By Jason Hickel and Martin Kirk
Posted September 5, 2019. Before you say no, take a moment to really ask yourself whether it’s the system that’s best suited to build our future society.

In February, college sophomore Trevor Hill stood up during a televised town hall meeting in New York and posed a simple question to Nancy Pelosi, the leader of the Democrats in the House of Representatives. He cited a study by Harvard University showing that 51% of Americans between the ages of 18 and 29 no longer support the system of capitalism, and asked whether the Democrats could embrace this fast-changing reality and stake out a clearer contrast to right-wing economics.

Pelosi was visibly taken aback. “I thank you for your question,” she said, “but I’m sorry to say we’re capitalists, and that’s just the way it is.”

The footage went viral. It was powerful because of the clear contrast it set up. Trevor Hill is no hardened left-winger. He’s just your average millennial—bright, informed, curious about the world, and eager to imagine a better one. But Pelosi, a figurehead of establishment politics, refused to–or was just unable to–entertain his challenge to the status quo. More… Today’s world is at war on many fronts. The rules of international law and order put in place toward the end of World War II are being broken by U.S. foreign policy escalating its confrontation with countries that refrain from giving its companies control of their economic surpluses.

Countries that do not give the United States control of their oil and financial sectors or privatize their key sectors are being isolated by the United States imposing trade sanctions and unilateral tariffs giving special advantages to U.S. producers in violation of free trade agreements with European, Asian and other countries.

This global fracture has an increasingly military cast. U.S. officials justify tariffs and import quotas illegal under WTO rules on “national security” grounds, claiming that the United States can do whatever it wants as the world’s “exceptional” nation. U.S. officials explain that this means that their nation is not obliged to adhere to international agreements or even to its own treaties and promises. More…

The Key to a Sustainable Economy Is 5,000 Years Old We are again reaching the point in the business cycle known as “peak debt,” when debts have compounded to the point that their cumulative total cannot be paid. Student debt, credit card debt, auto loans, business debt and sovereign debt are all higher than they have ever been. As economist Michael Hudson writes in his provocative 2018 book, “…and forgive them their debts,” debts that can’t be paid won’t be paid. The question, he says, is how they won’t be paid.

Mainstream economic models leave this problem to “the invisible hand of the market,” assuming trends will self-correct over time. But while the market may indeed correct, it does so at the expense of the debtors, who become progressively poorer as the rich become richer. Borrowers go bankrupt and banks foreclose on the collateral, dispossessing the debtors of their homes and their livelihoods. The houses are bought by the rich at distress prices and are rented back at inflated prices to the debtors, who are then forced into wage peonage to survive. More…

The Facts:
Most people are aware that our societies have reached a level of debt that cannot be repaid.

Reflect On:
The system is failing and perhaps it is time to consider following the wisdom of the ancients since what we are doing now is not working. Who would be the people pushing back against using this wisdom and do they have their own agendas?

An Economy Based on Plunder

[Economic]
An Economy Based on Plunder
by Paul Craig Roberts
Posted August 29, 2019

Capitalists have claimed responsibility for America’s past economic success. Let’s begin by setting the record straight. American success had little to do with capitalism. This is not to say that the US would have had more success with something like Soviet central planning.

Prior to 1900 when the frontier was closed, America’s success was a multi-century long success based on the plunder of a pristine environment and abundant natural resources. Individuals and companies were capitalized simply by occupying the land and using the resources present.

As the population grew and resources were depleted, the per capita resource endowment declined. More…