Nothing is more vital than enabling true transparency and adversarial journalism, and preventing further assaults on them. Excessive secrecy is the linchpin of government abuse of power.

Several weeks ago, I wrote about the steps taken by the US government to pressure large corporations to choke off the finances and other means of support for WikiLeaks in retaliation for the group’s exposure of substantial government deceit, wrongdoing and illegality. Because WikiLeaks has never been charged with, let alone convicted of, any crime, I wrote: “that the US government largely succeeded in using extra-legal and extra-judicial means to cripple an adverse journalistic outlet is a truly consequential episode.” At the end of that column, I disclosed that I had been involved in discussions “regarding the formation of a new organization designed to support independent journalists and groups such as WikiLeaks under attack by the US and other governments.” More…

Why Is the Obama FCC Plotting a Massive Giveaway to Murdoch?

Why Is the Obama FCC Plotting a Massive Giveaway to Murdoch?
by Craig Aaron
Posted November 28, 2012

What if I told you the Obama administration’s first major post-election policy move was a big, fat gift for Rupert Murdoch?

Journalists who dig into murky and dangerous corners of the world have become accustomed to being threatened and sometimes hunted by drug lords and gangsters, but now some governments have decided shooting the messenger is a viable option. The C.P.J. reports that government officials and their allies are now suspected of being responsible for more than a third of the murders of journalists, a higher proportion than killings attributed to terrorist groups or criminal enterprises.

While it is true that news media operations have become one more arrow in the quiver of modern warfare, a direct attack on information gatherers of any stripe is deeply troubling. And such attacks are hardly restricted to Israel: recall that in the United States assault on Baghdad, television stations were early targets. More…

“This year’s index sees many changes in the rankings, changes that reflect a year that was incredibly rich in developments, especially in the Arab world,” Reporters Without Borders said today as it released its 10th annual press freedom index. “Many media paid dearly for their coverage of democratic aspirations or opposition movements. Control of news and information continued to tempt governments and to be a question of survival for totalitarian and repressive regimes. The past year also highlighted the leading role played by netizens in producing and disseminating news.

“Crackdown was the word of the year in 2011. Never has freedom of information been so closely associated with democracy. Never have journalists, through their reporting, vexed the enemies of freedom so much. Never have acts of censorship and physical attacks on journalists seemed so numerous. The equation is simple: the absence or suppression of civil liberties leads necessarily to the suppression of media freedom. Dictatorships fear and ban information, especially when it may undermine them.

The interesting fact is that the United States has fallen from 20th in 2010 to 47th in 2011/12. This rating is lower than Botswana, Slovenia, Niger, Mali and Jamaica . The United States owed its fall of 27 places to the many arrests of journalist covering Occupy Wall Street protests. More... 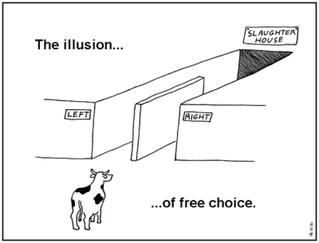 I had been trying to wrap my head around what happened with the Occupy Movement since the Department of Homeland Security coordinated destruction of most of the encampments around the country in November. The corporate mainstream media immediately moved onto more pressing issues like the Kim Kardashian divorce and Jessica Simpson’s weight gain. The American public has been instructed by the media the Occupy story is history, just like the BP oil spill, the Fukushima nuclear meltdown, and the Egyptian revolution. In a society consumed by reality TV Occupy Wall Street was just another show.

Obama’s signing of the NDAA, overwhelmingly supported by politicians of both parties, now gives the ruling class the ability to track down and imprison indefinitely any American citizen they consider a threat to their power, without charges. The only remaining thorn in their side is the internet. The internet has allowed critical thinkers to share information, organize resistance to the oligarchs, create communities of like-minded citizens, and allow individuals the opportunity to turn the tables and perform surveillance on the state. The state does not like an unfettered internet because it allows citizens to find the non-manipulated truth and undermines their mainstream media propaganda machine. Young people are less able to be manipulated. The introduction of abominable legislation like SOPA and PIPA are a blatant attempt by the governing elite to crush dissent by locking down the internet and eliminating sites that question their version of reality. More…

Tyranny is not a word to be used lightly. It is an accusation of a deliberate attack on basic liberty. It is especially not to be used in regard to partisan politics. Tyranny is something more fundamental and more noxious. So why did the Lebanon Daily News use that accusation in an editorial last Sunday?

The paper was condemning as tyranny and as “extremism writ large,” Senate Bill 1867, The National Defense Authorization Act. That bill, which passed the Senate on a vote of 93 – 7, deserves the accusation and an appropriate response.

The bill is so shrouded in stealth and duplicity that it has the smell of conspiracy. The main provisions were drafted in private by Senators Carl Levin and John McCain but without consultation with the Senate Judiciary Committee, the Intelligence Committee, the Defense Department, the FBI or the Intelligence Community. The word is apparently out that no one is to challenge or discuss this bill. And the entirety of the mainstream media is a willing accomplice. More…