Thought Police for the 21st Century

The abolition of net neutrality and the use of algorithms by Facebook, Google, YouTube and Twitter to divert readers and viewers from progressive, left-wing and anti-war sites, along with demonizing as foreign agents the journalists who expose the crimes of corporate capitalism and imperialism, have given the corporate state the power to destroy freedom of speech. Any state that accrues this kind of power will use it.

While the Internet has brought about a revolution in people’s ability to educate themselves and others, the resulting democratic phenomena has shaken existing establishments to their core. Google, Facebook and their Chinese equivalents, who are socially, logistically and financially integrated with existing elites, have moved to re-establish discourse control. This is not simply a corrective action. Undetectable mass social influence powered by artificial intelligence is an existential threat to humanity. While still in its infancy, the trends are clear and of a geometric nature. The phenomena differs in traditional attempts to shape cultural and political phenomena by operating at scale, speed and increasingly at a subtlety that eclipses human capacities. More…

As noted by numerous press outlets and press freedom advocates, the prosecution – the end point of the longstanding persecution of Julian Assange – represents, as James Goodale, New York Times’ counsel for the Pentagon Papers, eloquently points out, a grave threat to the freedom of the press, in the United States and all over the world. That US espionage laws would be used against an Australian citizen who has never lived or published in the US, should send a shockwave to every international journalist who comments on US affairs and foreign policy decisions.

In the first live-streamed event following the gagging of Julian Assange in March, John Kiriakou relayed that the Eastern District of Virginia is known as “the Espionage court,” as no national security defendant had ever won a case there, and it is the home of the Central Intelligence Agency. He said: “Assange couldn’t possibly get a fair trial in the Eastern District of Virginia.” More…

The Empire Keeps Proving Assange Right About Everything

Julian Assange founded an innovative leak outlet on the premise that corrupt power can be fought with truth and transparency. Corrupt power responded by silencing, persecuting and smearing him. In so doing they succeeded in slowing down the leaks, minimizing the impact of publications, and nullifying Assange’s ability to defend himself, and in exchange they have publicly proved that his thesis was, and is, absolutely correct. There is a power establishment which uses lies and secrecy to manipulate and deceive us, and it hates having the light of truth shone upon it more than anything. We know that for certain now. There is no doubt whatsoever.

The Trump Justice Department inadvertently revealed in a court filing that it has charged Julian Assange in a sealed indictment. The disclosure occurred through a remarkably amateurish cutting-and-pasting error in which prosecutors unintentionally used secret language from Assange’s sealed charges in a document filed in an unrelated case. Although the document does not specify which charges have been filed against Assange, the Wall Street Journal reported that “they may involve the Espionage Act, which criminalizes the disclosure of national defense-related information.”

Prosecuting Assange and/or WikiLeaks for publishing classified documents would be in an entirely different universe of press freedom threats. Reporting on the secret acts of government officials or powerful financial actors – including by publishing documents taken without authorization – is at the core of investigative journalism. From the Pentagon Papers to the Panama Papers to the Snowden disclosures to publication of Trump’s tax returns to the Iraq and Afghanistan war logs, some of the most important journalism over the last several decades has occurred because it is legal and constitutional to publish secret documents even if the sources of those documents obtained them through illicit or even illegal means. More… 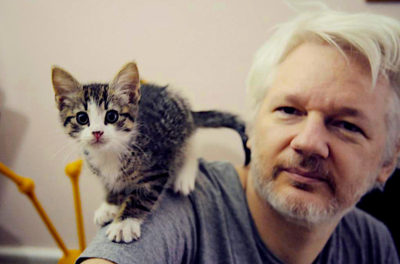 TEL AVIV — NSA whistleblower Edward Snowden told an Israeli audience on Tuesday that surveillance software designed by an Israeli company had been used to target groups of journalists in Mexico as well as Saudi journalist Jamal Khashoggi who was murdered last month in the Saudi consulate in Istanbul.

He explained that even if some “good actors” use NSO’s surveillance software, known as Pegasus, “it is not just being used for catching criminals and stopping terrorist attacks…not just for saving lives, but for making money…such a level of recklessness…actually starts costing lives.” Pegasus is a government-exclusive “lawful intercept” spyware program that is not available to the general public or even non-state clients. More…

Shadow Banning Is Just the Tip of the Iceberg: We’re All Digital Ghosts Now

Here is whatis.com’s description: “Shadow banning is controversial because it allows an administrator or moderator to effectively become a censor and prevent specific users from interacting with other members of an online community on an equal basis.”

Shadow banning and outright banning are only the tip of the iceberg: everyone who posts content on the web or social media is subject to much more subtle and completely opaque controls on how much of your digital presence has been ghosted–not just in social media communities but in searches and how links to your site/content and re-posts of your content are handled by the tech cartel that controls what’s visible and “found” on the web and social media. More…