At their meeting on June 19-22, the US Conference of Mayors will be considering hundreds of resolutions on everything from gun safety to tax incentives to jobs and education. Tucked into that long list of resolutions is the “Mayors Resolution on Strengthening Municipal Finances”.

This resolution addresses the millions of dollars in fees that Wall Street banks charge cities and challenges mayors to negotiate with bankers to reduce these fees or, alternatively, seek other more affordable means of financing– like establishment of a public bank.

How do cities amass such high banking service fees? A major way that cities accrue debt (and related fees and interest) is through bond issues. For example, in recent years voters approved a city bond issue to fix the roads and a county bond issue to build a new animal shelter. On Election Day 2015, voters will be asked to approve yet another bond issue— this one covering everything but the kitchen sink. Listen up, people! Bond issues are not a panacea for all local funding needs. Yes, bond issues allow us to have the services, facilities, and infrastructure improvements we need but can’t fit into the budget– thanks to budget cuts by the Legislature– but bond issues carry a hefty long-term price tag. More…

I know that many people see national finances as an impenetrable fog of numbers and acronyms, which they feel is best left up to financial specialists to interpret for them. But try to see national finances as a henhouse, yourself as a hen, and financial specialists as foxes. Perhaps you should pay a little bit of attention—perhaps a bit more than one would expect from a chicken?

So how can an ever-shrinking economy with a continuously rising unemployment rate be producing ever-higher stock valuations?

Simple! The stock prices are being driven up by the actions of the Federal Reserve. Since the great financial crisis of 2007, when the entire financial system almost collapsed, the Federal Reserve, through its Quantitative Easing (QE), has been making funds available at minimal cost to a set of financial institutions deemed “too big to fail.” More…

If You Have Money in a US Bank Account Be Aware!

If You Have Money in a US Bank Account Be Aware!
By Chris Vermeulen
Posted June 25, 2015

The Wall Street Reform and Consumer Protection Act of 2010 is better known as “The Dodd-Frank Act” to the American public. What the American public does not know about, is that it codifies a “bail-in” provision that ensures that the United States can conduct the type of bail-in that we saw in Cyprus.

The bank bailouts of 2008 and 2009 will now be history as Dodd-Frank authorizes the Federal Deposit Insurance Corp. to recapitalize failed financial institutions by confiscating customers’ deposits. A bail-in takes place before a bankruptcy under current regulations, regulators would have the power to impose losses on bank depositors while leaving other creditors of similar stature, such as derivatives counter-parties untouched. If your bank goes bust then your deposits/savings will be taken from you and turned into shares of the bank. You have no say in the matter because in legal terms, as a bank depositor, you are just an unsecured creditor of the bank. More…

In March 2014, the Bank of England let the cat out of the bag: money is just an IOU, and the banks are rolling in it. So wrote David Graeber in The Guardian the same month, referring to a BOE paper called “Money Creation in the Modern Economy.” The paper stated outright that most common assumptions of how banking works are simply wrong. The result, said Graeber, was to throw the entire theoretical basis for austerity out of the window.

The revelation may have done more than that. The entire basis for maintaining our private extractive banking monopoly may have been thrown out the window. And that could help explain the desperate rush to “fast track” not only the Trans-Pacific Partnership (TPP) and the Trans-Atlantic Trade and Investment Partnership (TTIP), but the Trade in Services Agreement (TiSA). TiSA would nip attempts to implement public banking and other monetary reforms in the bud. More…

How Obama’s “Trade” Deals Are Designed To End Democracy

As I previously reported, it really, truly, is the case that the “World’s Richest 80 People Own Same Amount as World’s Bottom 50%.” And, furthermore, the only rigorous scientific study that has ever been done of the extent to which a recognized ‘democratic’ country actually is a democracy found that that nation definitely is not. The nation was the United States. The U.S. was discovered to be, and long to have been, a dictatorship, in which the people who are not in the richest 10% have no impact whatsoever on the nation’s policies.

The fact that these ‘trade’ deals are being pushed right now, means that the people who are in power have concluded that, already, ‘the free world’ is so dictatorial, that the chances that their plan can now be imposed globally are about as good as is likely ever to be the case again. The time is ripe for them to establish a global corporate dictatorship. The political money this year will be flowing like never before. More…

The One Bank, Revisited

The One Bank, Revisited
By Jeff Nielson
Posted June 14, 2015

Goldman Sachs, JPMorgan, Bank of America, Morgan Stanley, Citigroup, Deutsche Bank, Barclays, Credit Suisse, UBS, Merrill Lynch, Bear Stearns, and Lehman Brothers are among the Big Banks listed as being tentacles of this enormous, financial crime syndicate. Note that the latter names on that list are deceased, (supposed) “casualties” of the Crash of ’08. But with all of these financial tentacles part of a single whole; this proves that the bail-outs which came after that event, and even the crash itself were pure fraud.

All of these financial losses were internal: one tentacle of the crime syndicate (supposedly) “losing money” to another tentacle of the same entity, meaning they were just phony, paper-losses which never really existed. The tentacle on the receiving end of the “losses” was enriched by that amount, meanwhile the tentacle on the losing end was indemnified via (fraudulent) taxpayer-funded “bail-outs”. Heads I win; tails you lose. More…

Three charts that show Iceland’s economy recovered after it imprisoned bankers and let banks go bust – instead of bailing them out
by Hazel Sheffield
Posted June 13, 2015

Iceland also allowed bankers to be prosecuted as criminals – in contrast to the US and Europe, where banks were fined, but chief executives escaped punishment.

The chief executive, chairman, Luxembourg ceo and second largest shareholder of Kaupthing, an Icelandic bank that collapsed, were sentenced in February to between four and five years in prison for market manipulation.

This year the International Monetary Fund declared that Iceland had achieved economic recovery ‘without compromising its welfare model’ of universal healthcare and education. More…

Why the TPP Is a Terrible Deal for Most Americans

Why the TPP Is a Terrible Deal for Most Americans
by Representative John Conyers
Posted June 12, 2015 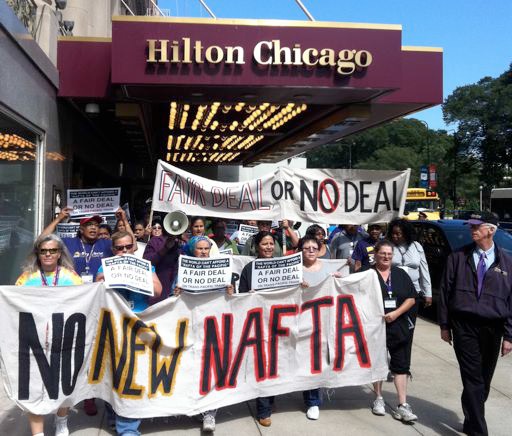 Both the TPP and the forthcoming Trans-Atlantic Trade and Investment Partnership present a series of unforeseen risks that cannot be easily quantified in economic terms. Consider how a key element of the trade deals known as the Investor-State Dispute Settlement (ISDS) mechanism would allow foreign corporations to challenge US health, safety, and environmental protections. If US regulators ban production of a toxic chemical manufactured by a foreign firm for fears that it may end up in our food system or in our air, the manufacturer of that chemical could, under the terms of a trade agreement, challenge our government before a special international ISDS tribunal for frustrating its expectations and ultimately demand compensation for anticipated future profits.

The special tribunal—often comprised of highly compensated corporate lawyers rather than professional judges—could require US taxpayers to pay the firm millions in damages, and the ruling could not be challenged in our domestic courts. This shadowy system is already the reality under NAFTA and other trade agreements, and it would be expanded dramatically under the TPP. More…

Most people never heard of it. They’re not told how they’re systematically deceived, lied to and swindled. There’s nothing fair about US free trade agreements. In June 2014, WikiLeaks released a secret TISA Financial Services Annex text covering 50 countries and over two-thirds of world trade in services.

It aims for deregulating global financial services markets more than already. It allows unrestricted exchange of personal and financial data.The Electronic Frontier Foundation (EFF) calls the Trans-Pacific Partnership (TPP), Trans-Atlantic Trade and Investment Partnership (TTIP) and TISA “a trifecta of trade agreements (Obama) could sign under Fast Track without full congressional oversight” if authority to do so is granted.

TISA is another nightmarish anti-consumer measure. It mandates global rules affecting Internet use and other “free flow of information” restrictions. More…

While we were thinking about what was really going on with today’s strange new money system, a startling thought occurred to us. Our financial system could take a surprising and catastrophic twist that almost nobody imagines, let alone anticipates.

Do you remember when a lethal tsunami hit the beaches of Southeast Asia, killing thousands of people and causing billions of dollars of damage?

Well, just before the 80-foot wall of water slammed into the coast an odd thing happened: The water disappeared. The tide went out farther than anyone had ever seen before. Local fishermen headed for high ground immediately. They knew what it meant. But the tourists went out onto the beach looking for shells!

The same thing could happen to the money supply. There’s Not Enough Physical Money. Here’s how… and why: More…