As a growing number of states move to pass laws that would criminalize pipeline protests and hit demonstrators with years in prison, an audio recording obtained by The Intercept showed a representative of a powerful oil and gas lobbying group bragging about the industry’s success in crafting anti-protest legislation behind closed doors.

Speaking during a conference in Washington, DC in June, Derrick Morgan, senior vice president for federal and regulatory affairs at the American Fuel & Petrochemical Manufacturers (AFPM), touted “model legislation” that states across the nation have passed in recent months. AFPM represents a number of major fossil fuel giants, including Chevron, Koch Industries and ExxonMobil.

“We’ve seen a lot of success at the state level, particularly starting with Oklahoma in 2017,” said Morgan, citing Dakota Access Pipeline protests as the motivation behind the aggressive lobbying effort. “We’re up to nine states that have passed laws that are substantially close to the model policy that you have in your packet.” More…

Demythologizing the Roots of the New Cold War

The doctrinal narrative that is told in the U.S. is the narrative of a very short road whose every turn was signposted by Russian lies, betrayal, deception and aggression. The American telling of history is a tale in which every blow to the new peace was a Russian blow.

The fact checked version offers a demythologized history that is unrecognizably different. The demythologized version is also a history of lies, betrayal, deception and aggression, but the liar, the aggressor, is not primarily Russia, but America. It is the history of a promise so historically broken that it laid the foundation of a new cold war.

Bankrupt and Irrelevant: the Presidential Debates and Four Recent Studies on Pentagon Spending

In the almost 12 hours of Democratic Party presidential primary debates on June 26-27 and July 30-31, the words “Pentagon budget” or “defense spending” were not uttered, except for a fleeting, unanswered comment from Senator Bernie Sanders. Nor did any of the cable news moderators ask a single question about the more than $1.25 trillion dollars spent in 2019 for national security.

This is sad but unsurprising. Despite the parade of scandals and the billions of dollars wasted on poorly performing, schedule busting, cost exploding weapons systems, the dismal failure of the Department of Defense’s (DOD) audit, the grossly overpriced spare parts, the ethically challenged senior leaders and the widely reported collapse in training and readiness, the issue of Pentagon spending and a decaying defense has been steadfastly shunned by both the candidates and the debate moderators. More… 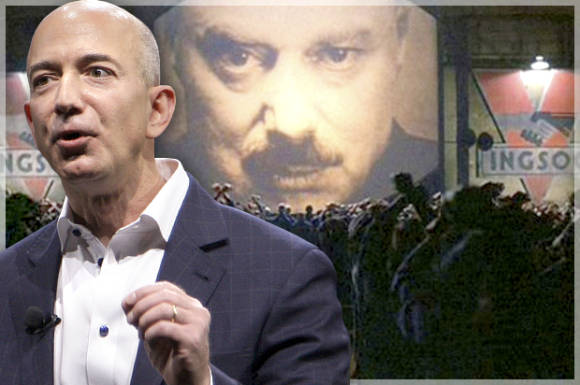 Jeff Bezos is the owner of The Washington Post, which leads America’s news-media in their almost 100 percent support and promotion of neoconservatism, American imperialism and wars. This includes sanctions, coups, and military invasions against countries that America’s billionaires want to control but don’t yet control — such as Venezuela, Syria, Iran, Russia, Libya, and China.

These are aggressive wars against countries which have never aggressed against the United States. They are not, at all, defensive, but the exact opposite. It’s not necessarily endless war (even Hitler hadn’t planned that), but war until the entire planet has come under the control of the U.S. Government, a government that is itself controlled by America’s billionaires, the funders of neoconservatism and imperialism — in both major American political parties, think tanks, newspapers, TV networks, etcetera. More…

Reflect On:
The next time you hear “news” that instills fear or anger in you, consider how the elites are benefiting from that. Consider how you can avoid being manipulated by the propaganda machine. The American Fuel & Petrochemical Manufacturers, a powerful lobbying group that represents major chemical plants and oil refineries, including Valero Energy, Koch Industries, Chevron, ExxonMobil, and Marathon Petroleum, has flexed its muscle over environmental and energy policy for decades. Despite its reach, AFPM channels dark money and influence with little scrutiny.

The group is now leveraging its political power to criminalize protests of oil and gas infrastructure.

In an audio recording obtained by The Intercept, the group concedes that it has been playing a role behind the scenes in crafting laws recently passed in states across the country to criminalize oil and gas pipeline protests, in response to protests over the Dakota Access pipeline. The laws make it a crime to trespass on public land used for “critical infrastructure,” impose a fine or prison time for violators, and hold protesters responsible for damage incurred during the protest. Many of the laws also carry heavy fines to groups and individuals who support such demonstrations. More…

The Facts:
Industry lobbyists have been writing legislation that favors their interests, and the Citizen’s United ruling gives them even more clout than they had earlier.

Reflect On:
Think about this for a minute, corporate lobbyists are writing legislation outlawing free speech because it conflicts with their profits. They actually have the taxpayers pay for the police, and militarized protection, building roads and other infrastructure, and providing other services for them, all while restricting freedoms of the people.

The Anglo-American Origins of Color Revolutions A few years ago, very few people understood the concept behind color revolutions.

Had Russia and China’s leadership not decided to unite in solidarity in 2012 when they began vetoing the overthrow of Bashar al Assad in Syria- followed by their alliance around the Belt and Road Initiative, then it is doubtful that the color revolution concept would be as well-known as it has become today.

At that time, Russia and China realized that they had no choice but to go on the counter offensive, since the regime change operations and colour revolutions orchestrated by such organizations as the CIA-affiliated National Endowment for Democracy (NED) and Soros Open Society Foundations were ultimately designed to target them as those rose, orange, green or yellow revolution efforts in Georgia, Ukraine, Iran or Hong Kong were always recognized as weak points on the periphery of the threatened formation of a great power alliance of sovereign Eurasian nations that would have the collective power to challenge the power of the Anglo-American elite based in London and Wall Street. More…