Listing of articles, videos, and interviews with and by Rudy Avizius
Videos produced by Rudy and Kathy Avizius

This so called free trade agreement represents a threat even greater than the Citizens United ruling. The Trans Pacific Partnership agreement is being negotiated and the details are kept totally secret with not even members of Congress and the Senate having access to the text. If implemented, this agreement will hard code corporate dominance over sovereign governments into international law that will supercede any federal, state, or local laws of any member country. This document should set alarm bells ringing.

The details contained in this TPP agreement will result in total corporate global governance . In this new system the role of elected governments will be to serve as subservient agents for our [corporate] nterests. The institutions under governments such as the armies, police, and courts will also serve our [corporate] interests, while being financed by the taxpayers of that country. The status of the member states will be locked-in, similar to countries once they are inside the Eurozone.

In the future, once this agreement has been ratified, Internet censorship regulations will be passed that are much stronger than the previous ones we tried to pass, such as ACTA, SOPA, and PIPA. This will lock down the Internet so we can use it for our [corporate] purposes. Once this has been accomplished, the public masses will have no alternatives except for our controlled media. More…

Radio Interview – The Secret TPP That Our Congress Cannot See

On June 12, a leaked copy of the investment chapter for the Trans-Pacific Partnership (TPP) was made public. This copy was analyzed by Public Citizen’s Global Trade Watch and has been verified as authentic. This agreement has been negotiated IN SECRET for 2-1/2 years and no information has ever been released until this leak. So why have the details of this negotiation been so secret? This agreement has been framed as a “free trade” agreement and yet out of 26 chapters only two have anything to do with trade. The other 24 chapters grant new corporate privileges and rights, while limiting governments and protective regulations.

If implemented, this agreement will hard code corporate dominance over sovereign governments into international law that will supercede any federal, state, or local laws of any member country. This document alone should set alarm bells ringing, but if one steps back and looks at the larger picture, the future ramifications look even more ominous. After completing this reading, see what your conclusions are. More…

Article – The DISEASE is our Monetary System

The DISEASE is our Monetary System
Posted May 28, 2012

Consider these questions: If you owned a printing press in your basement and could LEGALLY print your own money…

Of course you would print your own money. Our government is in exactly this same position. It can legally print its own money as stipulated by the Constitution, and yet we have the spectacle of our the government going to private bankers to borrow money to pay its bills, rather printing its own debt free money. Most people are not aware of this fact, and that is by design.

Can you imagine yourself printing your money, then selling these same bills for the cost of printing to a private bank? Then imagine yourself then going back to the bank and borrowing that same money at face value plus interest. More…

Radio interview (MP3 format) with 3CR community radio, May 2012. The corruption of the political system by the financial elites. The situation of having taxpayer public payment of private banker debt.

Most people in the United States have long suspected that a “shadow government” exists and that the real power in the country resides in that dark location, not in our elected government. The citizens instinctively know that our elected officials are really nothing more than the hired servants of the money masters and are beholden to them if they wish to retain their positions of power.

A quick look at the curtain which they hide behind reveals one shadowy organization that represents the interests of these money masters, the International Swaps and Derivatives Association also known as ISDA. The officers and directors of this organization include some of the largest hedge funds and most of the major banks in the world including the largest banks in the United States. One of the purposes of the ISDA is determine if a “credit event” is actually a default. If a “credit event” is declared to be a default, then Credit Default Swap (CDS) contracts come into play. 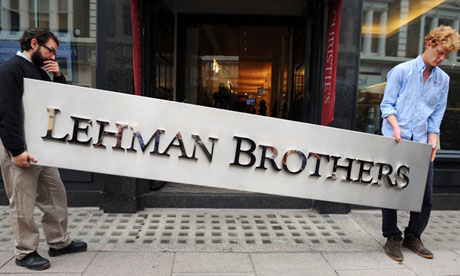 The total value of Credit Default Swaps for 2011 is a staggering $32,409 BILLION dollars! That is $32 TRILLION, with a “T”! To put this into perspective the gross domestic product (GDP) of the United States in 2010 — the total value of all the goods and services generated in the entire country that year — was $14.6 trillion. The amount of credit default swaps held by the banks dwarfs the entire economic output of the United States. There is no way in hell that these banks could ever pay even a small fraction of these claims. The TOTAL amounts of all derivatives is a staggering $707 TRILLION plus a measly few hundred billion more. This entire system is a house of cards just waiting for a single card to fall. There is not enough money on this planet to cover these contracts.

Has anyone asked themselves this question: where would our country’s economy be right now, if they had enforced banking regulations as vigorously as they enforce park rules?

It is ironic that so many in this country have fallen for the corporate media propaganda that seeks to divide the masses and have us fight each other. They wish to accomplish this so that we do not focus on those who pillaged the economy and Treasury and left the devastation of millions without jobs, millions of families foreclosed upon and left in the streets to fend for themselves, the 50 million without health insurance, and the record nearly 46 million now on food stamps . This is a standard divide and conquer tactic so that we are focused on each other, rather than on the perpetrators. The corporate media drivel tells us that these victims are lazy, and need to work harder to find jobs. The corporate media where the rich pay other rich people to tell the middle class to blame poor people.

It is time to let the “too big to fail” banks know that they do not have the final say. They can buy our politicians, they can generate fraudulent mortgage documents, they can buy legal protection against prosecution, but they have no defense against the combined economic might of the people!

VOTE WITH YOUR POCKET BOOK!

The big banks have been draining our economy, placing their profits in off shore accounts, not paying their fair share in taxes, financing the shipping of our jobs overseas, getting government bailouts, and paying their executive HUGE bonuses. They take the money they make in your community and ship it out impoverishing your community.

Article – Is the US becoming a Police State? 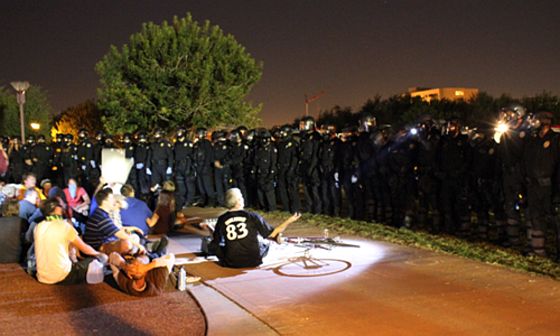 Is this sort of intimidation and police force really necessary against peaceful protestors? The Phoenix Arizona police clearly outnumber the protestors and they have the badges and the guns. Who are they “protecting”?

The video shows Office Anthony Bologna pepper spraying several young women without provocation. Later in the day he indiscriminately pepper sprayed again and that was also caught on video and it went viral. Who was (yes, I had to laugh as well) Tony Baloney “protecting”?

This coward who hides behind his badge and gun, had the audacity to pepper spray someone’s daughter. After an “investigation”, he was docked 10 vacation days. He remains in a position of leadership in the NYPD. What do you think would happen if you or I pepper sprayed one of his daughters?