The Conflict within the Deep State Just Broke into Open Warfare

Vault 7 is not just political theater–it highlights the core questions facing the nation: what is left to defend if civil liberties and democratically elected oversight have been reduced to Potemkin-village travesties?

If there are no limits on CIA powers and surveillance, then what is left of civil liberties and democracy? Answer: nothing.

The battle raging in the Deep State isn’t just a bureaucratic battle–it’s a war for the soul, identity and direction of the nation. Citizens who define America’s interests as civil liberties and democracy should be deeply troubled by the Establishment’s surrender of these in favor of a National Security State with essentially no limits. More…

Whistleblowers vs. The State

[Social]
Whistleblowers vs. The State
by Carey Wedler
Posted March 13, 2017 Immediately after Wikileaks released thousands of documents revealing the extent of CIA surveillance and hacking practices, the government was calling for an investigation — not into why the CIA has amassed so much power, but rather, into who exposed their invasive policies.

Putting aside the fact that, according to popular American mythology breaking the law is a patriotic duty, the government and politicians’ reactions are both hypocritical and habitual.

When Chelsea Manning revealed damning evidence of U.S. war crimes in Iraq, including soldiers directly targeting Reuters news staff, the response was not to investigate who allowed those crimes. Rather, Manning was subject to a military tribunal and issued multiple life sentences, a cruel and unusual punishment reversed only in President Obama’s last days in office amid his attempts to salvage his abysmal human rights, transparency, and whistleblower record. More…

Welcome Aboard, But First US Marshals Will Scan Your Retina

[Social]
Welcome Aboard, But First US Marshals Will Scan Your Retina
by Jeffrey Tucker
Posted March 13, 2017 We had already been through boarding pass checks, passport checks, scanners, and pat downs. At the gate, each passenger had already had their tickets scanned and we were all walking on the jet bridge to board. It’s at this point that most people assume that it is all done: finally we can enjoy some sense of normalcy.

This time was different. Halfway down the jetbridge, there was a new layer of security. Two US Marshals, heavily armed and dressed in dystopian-style black regalia, stood next to an upright machine with a glowing green eye. Every passenger, one by one, was told to step on a mat and look into the green scanner. It was scanning our eyes and matching that scan with the passport, which was also scanned (yet again).

The scene reminded me of movies I’ve seen, like Hunger Games or 1984. It’s chilling and strange, even deeply alarming to anyone who has ever dreamed of what freedom might be like. It doesn’t look like this. More… Besides being the vital fluid that courses through our bodies, “blood” serves as a useful metaphors (as the one in the first paragraph about George Washington) that connote the diminishment or loss of what is valued by the victims and their loved ones.

The first purpose of this essay is to highlight the ways in which America’s power elite “let blood” literally and figuratively, with the metaphorical instances causing all sorts of human misery up to and including death. The second purpose is to underscore just who the real enemy of the American people is, America’s corpocracy and its power elite. The only reason the U.S. has foreign enemies is that the corpocracy creates them to sustain and grow its profits and power.

The essay begins with an overview of the greatest bloodletters, literally, of all time throughout the history of America, her presidents, and then overviews the bloodletting, figuratively and literally, by the captains of industry. The reason for picking the two at the top of their pecking orders is that any form of wrongdoing, bloody or not, is done under their leadership. They either authorize it explicitly, implicitly as in setting “wink and nod” expectations, or indirectly in creating and/or condoning an organizational culture of “anything goes.” More…

A Crackdown on the Poor and Hungry

[Social]
A Crackdown on the Poor and Hungry
By Dennis Bernstein
Posted March 1, 2017

The most common government response to the suffering of those being forced into homelessness is for local authorities to make laws against being homeless. Laws against sleeping, sitting, asking for money or what officials call ‘Quality of Life Crimes,’ living outside and lower[ing] the quality of life of those fortunate enough to not yet be forced out into the streets.

Another [tactic] is to pass laws seeking to end the sharing of meals to the hungry in public … hoping that by hiding the ‘problem’ of seeing so many of our neighbors living [on the streets], it will go away. Over 70 cities have passed laws regulating or banning the sharing of free food with the homeless outside.

According to a recent report from the Federation of Protestant Welfare Agencies, 21.8 percent of the nation’s children and 15 percent of the population overall are poor and often hungry. Despite the growing needs of the homeless, the Federal government continues to cut vital services and assistance meant to help the most at-risk among us. More…

Coming Soon to a City Near You: The U.S. Military’s Plan to Take Over America

[Social]
Coming Soon to a City Near You: The U.S. Military’s Plan to Take Over America
By John W. Whitehead
Posted February 27, 2017

It’s happening already. “We the people” have become enemy #1.

The sight of police clad in body armor and gas masks, wielding semiautomatic rifles and escorting an armored vehicle through a crowded street, a scene likened to “a military patrol through a hostile city,” no longer causes alarm among the general populace.

Few seem to care about the government’s endless wars abroad that leave communities shattered, families devastated and our national security at greater risk of blowback. Indeed, there were no protests in the streets after U.S. military forces raided a compound in Yemen, killing “at least eight women and seven children, ages 3 to 13.”

Before long, no one will even notice the floundering economy, the blowback arising from military occupations abroad, the police shootings, the nation’s deteriorating infrastructure and all of the other mounting concerns. It’s happening already. More…

Rule by Brute Force: The True Nature of Government

The torch has been passed to a new president.

All of the imperial powers amassed by Barack Obama and George W. Bush—to kill American citizens without due process, to detain suspects indefinitely, to strip Americans of their citizenship rights, to carry out mass surveillance on Americans without probable cause, to suspend laws during wartime, to disregard laws with which he might disagree, to conduct secret wars and convene secret courts, to sanction torture, to sidestep the legislatures and courts with executive orders and signing statements, to direct the military to operate beyond the reach of the law, to act as a dictator and a tyrant, above the law and beyond any real accountability—have been inherited by Donald Trump.

Whatever kind of president Trump chooses to be, he now has the power to completely alter the landscape of this country for good or for ill. More… 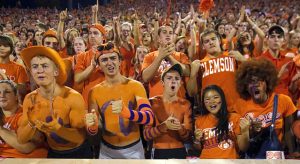 Fuuhhhhhtttttball especially but also the others.

These games – a new one to keep people busy almost every day, year-round – are not so much “bread and circuses,” as they are often called. They are the vivification of the fictional Two Minutes’ Hate in Orwell’s 1984. A means by which the passions – the frustrations and anger of men in particular – are diverted and dissipated. More…