My goal here is only to point out that manipulation is happening, not to discourage people from protesting the draconian abuses of America’s increasingly militarized police force. Please do protest these things loudly and aggressively — but don’t do it because of Trump. Making it about Trump means entering into the same establishment partisan bullshit that saw this epidemic go completely unaddressed throughout Obama’s two terms and aligning yourself with the neoliberal neoconservative oligarchic one-party system. You might be saying some of the same things as the Democratic establishment loyalists, but please be acutely aware at all times that these people are not your friends, and they will not help you.

Just as Trump doesn’t actually give a shit about the flag, establishment Democrats don’t actually give a shit about black lives. For decades the Democratic party has been using the fake two-party system to blackmail minorities into supporting a party that acts completely contrary to their socioeconomic interests under the threat that Republicans will be even worse. Republicans and Democrats have been playing a good cop/bad cop routine to coerce America’s most disadvantaged populations into supporting the bloodthirsty plutocratic establishment under the threat that if they don’t they will have their civil rights taken away. Make no mistake: the “good cop” in this schtick has been just as complicit in this exploitation as the “bad cop”. They’ve both been working together toward the same exact goal. More…

An Anti-Poverty Program That Makes It Pay to Work

[Social]
An Anti-Poverty Program That Makes It Pay to Work
By Aditi Katti
Posted September 24, 2017

Imagine a government-funded anti-poverty tool that encouraged people to work. Now imagine that it’s popular with both Democrats and Republicans, in red states and blue.

Turns out we’ve had just such a tool since 1975: the Earned Income Tax Credit, or EITC.

The EITC is of the most popular and effective anti-poverty tools. It’s a refundable tax credit for workers in eligible low-income families, especially those with children.

The credit works on a phase in, phase-out system. Qualifying families receive more tax credits as income increases up to a certain threshold, and then slowly phases out as income increases past that point. That makes it less likely that workers will turn away jobs or raises for fear of losing benefits. More… 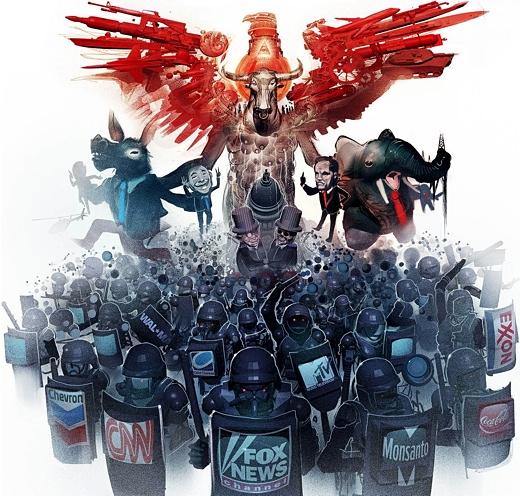 Those who constitute the Deep State are not conspiring directly by working together to rule the world and control the people. What they are doing is taking advantage of a dumbed down fearful populace by using the chaos, incompetence of institutions, and confusion spread by the propaganda press to institute their agendas. The Deep State consists of shadowy billionaires, mega-corporations, the military industrial complex, surveillance state agencies, crooked bought off politicians and their mass media mouthpieces.

These Deep State players don’t meet every other Saturday to conspire and plot ways to pillage and enslave the masses. But they do know each other and silently agree to never rock the boat, whether they are Democrats, Republicans, liberals, conservatives, socialists, corporate executives, academics, or journalists. Money, control and power are at stake. More…

The Growing Threat of the Police State

[Social]
The Growing Threat of the Police State
by Nick Giambruno
Posted September 18, 2017

In my experience, the US has some of the most aggressive police in the world. I first noticed this when I started traveling many years ago. I’ve also noticed that law-abiding citizens are more likely to encounter the police in the US. Both of these trends are accelerating.

What happened to “the boys in blue”—the friendly cop on the beat that everyone knew personally and trusted?

The fact is that police forces throughout the US have been militarized. Every little town has a SWAT team, sometimes with armored personnel carriers. All of the Praetorian style agencies on the federal level—the FBI, CIA, NSA, and over a dozen others like them—have become very aggressive. Every single day in the US, there are scores of confiscations of people’s bank accounts, and dozens having their doors broken down in the wee hours of the night. The ethos in the US really seems to be changing right before our very eyes, and I think it’s quite disturbing. It’s a harbinger, I’m afraid, of what’s to come. More…

Afghanistan and the CIA Heroin Ratline The Persian Gulf harbors an array of extremely compromising secrets. Near the top is the Afghan heroin ratline — with the United Arab Emirates (UAE) positioned as the golden node of a transnational, trillion dollar heroin money laundering operation.

In this 21st century Opium War, crops harvested in Afghanistan are essentially feeding the heroin market not only in Russia and Iran but especially in the US. Up to 93% of the world’s opium comes from Afghanistan.

Contrary to predominant Western perception, this is not an Afghan Taliban operation. The key questions — never asked by Atlanticist circles — are who buys the opium harvests; refines them into heroin; controls the export routes; and then sell them for humongous profit compared to what the Taliban have locally imposed in taxes. More…

Wall Street Is the Most Dangerous Example of Corporate Domination

[Economic]
Wall Street Is the Most Dangerous Example of Corporate Domination
By Pam Martens and Russ Martens
Posted September 11, 2017

As if someone had quietly turned on a light bulb last month illuminating the corporate takeover of America, a series of articles from multiple outlets chronicled the demise of American democracy under the jackboot of the corporate state.

What is fascinating to us is that so few American journalists have adequately expanded on the seminal work of Senator Bernie Sanders to enlighten the public during last year’s presidential primary race to the fact that Wall Street is to concentrated and perverted corporate power what Hurricane Harvey is to a water main break. No other industry in America even comes close. More…

Joe Arpaio Is No Aberration

Even most leftish white Americans like to think that their country is good and its institutions are fair and equitable. According to this wishful thinking human rights abuses only happen in faraway places and injustices here are resolved by reining in a few bad apples. The facts say otherwise and prove that the United States is consistently one of the worst human rights violators in the world. The cruelty of its prison system extends far beyond headlines of a few well known villains like David Clarke and Joe Arpaio.

Arpaio is surely deserving of scorn heaped upon him. He referred to his jails as “concentration camps.” He held prisoners outdoors in tents, a violation of national and international law. Arpaio was convicted of contempt of court because he continued to detain undocumented people without charge in violation of a judge’s order. More…

How the US Deep State Accidentally Forged a Multipolar World Order

As the Berlin Wall fell and eliminated the Soviet «threat», American expansion had almost reached its existential limit. What has been a constant element during all of these US presidencies, during various wars and economic growth thanks to a rising capitalism, has been the presence of the deep state, a set of neural centers that make up real US power. In order to understand the failure of the deep state to achieve its goals to exercise full-spectrum control over the globe, it is crucial to trace the connections between past and the present presidencies from the fall of the Berlin Wall.

When thinking of the deep state, it is easy to identify the major players – the mainstream media, think-tanks, central and private banks, foreign-state lobbyists, politicians, intelligence agencies, large industrial groups, and the military-industrial complex (MIC). These are the inner circles that hold the true levers of power in the United States. More…