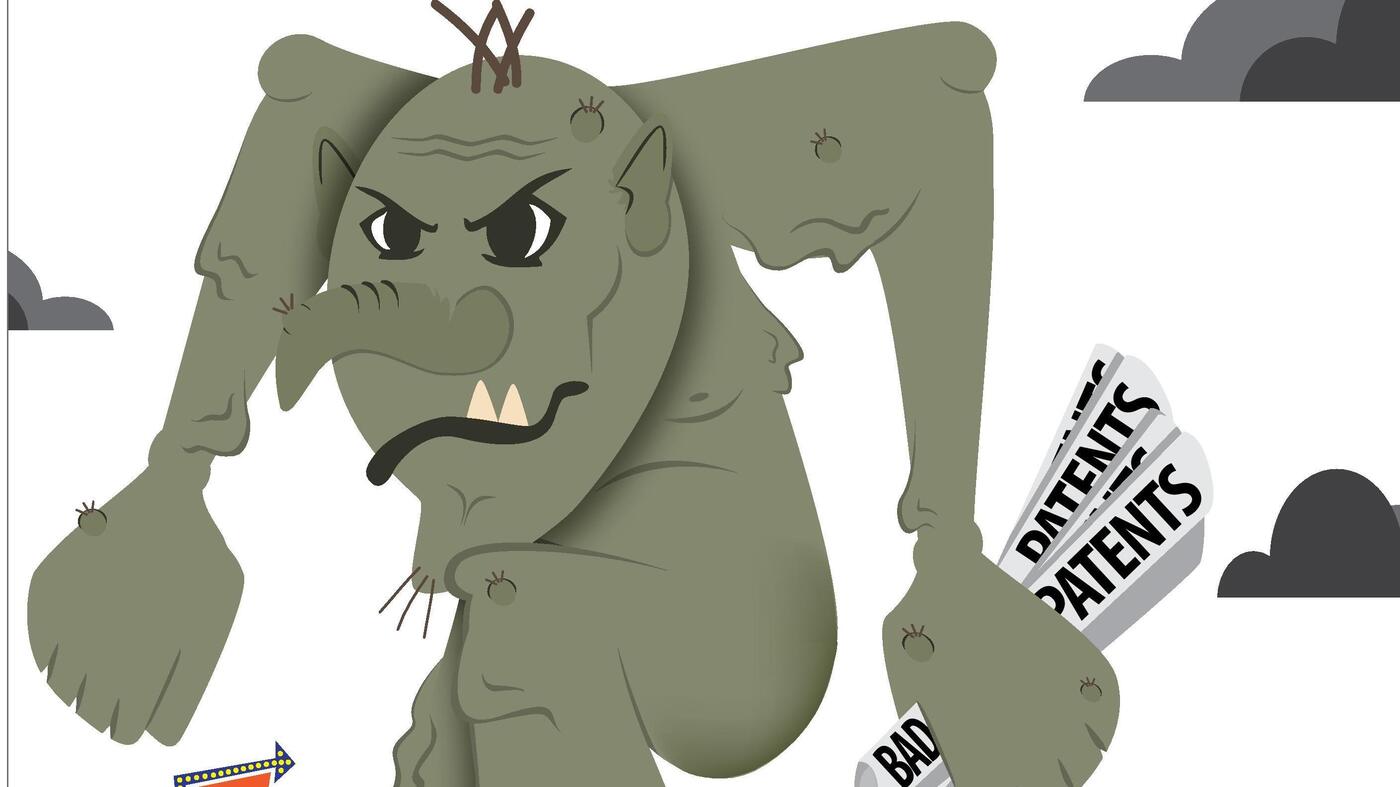 Patent trolls aren’t a myth. They aren’t a bedtime story. Ask a software developer—they’re likely to know someone who has been sued or otherwise threatened by one, if they haven’t been themselves.

Patent trolls aren’t a thing that happens once in a while or an exception to the rule. Over the past two decades, troll litigation has become the rule. There are different ways to measure exactly what a “troll” is, but by one recent measurement, a staggering 85 percent of recently filed patent lawsuits in the tech sector were filed by trolls.

That’s almost 9 out of 10 lawsuits being filed by an entity with no real product or service. Because the Patent Office issues so many low-quality software patents, the vast majority of these suits are brought by entities that played no role in the development of the real-world technology they attack. Instead, trolls use vague and overbroad patents to sue the innovators who create products and services. This is how we end up with patent trolls suing people for running an online contest or making a podcast. More…

Need an Election Meddled With or an Activist Doxxed? Call on These Israeli Spies

[Social]
Need an Election Meddled With or an Activist Doxxed? Call on These Israeli Spies
by Alexander Rubinstein
Posted March 16, 2019

Israel’s special relationship with the United States has given it a free pass for atrocities in Gaza. But, beyond this, in an era of legal gray zones in the area of online disinformation operations, the country’s private spy community has been given carte blanche to covertly meddle in a host of nations.

Private Israeli spy companies have been meddling in other countries, including their elections, at previously unknown levels. The private intelligence firm Psy-Group went to great lengths to pitch the Trump presidential campaign on its services and nakedly meddled in a small-town California election, according to a new report published in the latest issue of The New Yorker. Meanwhile, a number of people associated with lawsuits against NSO Group, infamous for its Pegasus spyware, have become targets of another spying group, according to an AP exclusive.

Black Cube has been described by people familiar with its work as the “almost privatized wing of Mossad,” and it is staffed, like NSO Group and Psy-Group, with ex-agents. More…

For the last two-hundred years or so, we have been conditioned to think of ourselves as the citizens of a collection of sovereign nation states, as “Americans,” “Germans,” “Greeks,” and so on. There are no more sovereign nation states. Global capitalism has done away with them. Which is why we are experiencing a “neo-nationalist” backlash. Trump, Brexit, the so-called “new populism” … these are the death throes of national sovereignty, like the thrashing of a suffocating fish before you whack it and drop it in the cooler. The battle is over, but the fish doesn’t know that. It didn’t even realize there was a battle until it suddenly got jerked up out of the water.

In any event, here we are, at the advent of the global capitalist empire. We are not going back to the 19th Century, nor even to the early 20th Century. Neither Donald Trump nor anyone else is going to “Make America Great Again.”

Global capitalism will continue to remake the world into one gigantic marketplace and by militarizing the police, who they will need to maintain “public order” … you know, like they are doing in France at the moment, by beating, blinding, and hideously maiming those Gilets Jaunes (i.e., Yellow Vest) protesters that the corporate media are doing their best to demonize and/or render invisible. More… 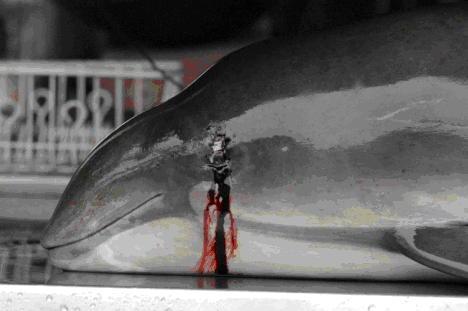 While scientists have already linked naval sonar with mass strandings of some whales, like beaked whales, they haven’t understood exactly what the cause was – until now. Turns out, it’s literally scaring them to death.

Beaked whales are among the deepest diving marine mammals on earth, with Cuvier’s beaked whales hitting some of the deepest depths – going nearly 10,000 feet below the surface. Their bodies have adapted to allow them to go so deep to forage; their heartrate slows, blood flow is restricted and oxygen is conserved.

Oddly enough, scientists have found that stranded whales have nitrogen bubbles in their tissues, which is a telltale sign of compression sickness, otherwise known as “the bends.” It’s a painful condition often associated with scuba divers who rise to the surface too quickly, so it’s strange that whales would be suffering from it. More…

The Facts:
It is a known fact that naval use of sonic blasts, sonar and other acoustic systems is injuring sea life. Remember that sound travels in water much further and more efficiently than in air.

Reflect On:
What is the morality of conducting naval “exercises” that forces whales, dolphins, porpoises, and other marine beings to deliberately beach themselves to escape the deafening sounds that have actually left them bleeding from their ears?

Martial Law Is Unacceptable Under Any President

[Social]
Martial Law Is Unacceptable Under Any President
by Brandon Smith
Posted February 24, 2019

In the midst of the three ring circus known as the false Left/Right paradigm it is sometimes easy to forget that there is a motive behind the chaos; that there is an intended end game. Part of that end game, I believe, is the eventual erasure of individual liberties and the implementation of martial law in the US. However, the establishment quest for government lockdown requires something very special in order to succeed – They need a considerable percentage of the population to support and defend it.

Governments rarely attempt outright martial law. The reason should be obvious; no military, no matter how advanced, has the capacity to suppress a unified citizenry. If the public is armed, the task becomes even more impossible. The laws of attrition alone would make the conflict bloody and costly. More…

The Facts:
The main stream media and governments work hard to keep us divided, fighting among ourselves, and living in a climate of fear.

Reflect On:
The next time you see an article that resorts to name calling, pointing fingers at “the other(s)”, and instills a sense of unease or anger in you, consider whether this is an attempt to manipulate of your feelings. Is it possible that these manipulations are imposed on “both sides” to keep us focused and fighting each other, rather than those who doing the manipulations?

[Politics]
The Ruling Elites Love How Easily We’re Distracted and Turned Against Each Other
By Charles Hugh Smith
Posted February 15, 2019 No wonder the ruling elites love how easily we’re distracted and divided against ourselves: it’s so easy to dominate a distracted, divided, blinded-by-propaganda and negative emotions populace.

Let’s say you’re one of the ruling elites operating the nation for the benefit of the oligarchy. What’s the best way to distract the populace from your self-serving dominance in a blatantly neofeudal system? More…

Is Big Tech Merging With Big Brother? Kinda Looks Like It

The machines and systems that the techno-monopolists have built are changing us faster than they or we understand. The scale of this change is so vast and systemic that we simple humans can’t do the math—perhaps in part because of the way that incessant smartphone use has affected our ability to pay attention to anything longer than 140 or 280 characters.

As the idea of a “right to privacy,” for example, starts to seem hopelessly old-fashioned and impractical in the face of ever-more-invasive data systems—whose eyes and ears, i.e., our smartphones, follow us everywhere—so has our belief that other individual rights, like freedom of speech, are somehow sacred.

Being wired together with billions of other humans in vast networks mediated by thinking machines is not an experience that humans have enjoyed before. The best guides we have to this emerging reality may be failed 20th-century totalitarian experiments and science fiction. More…

The Facts:
A “social credit system” is already being implemented in China, and US big tech forms are vacuuming up vast amounts of personal data.
Reflect On:
What will be the consequences not controlling our corporations (and governments) in their increasingly intrusive surveilance of our activities and relationships? Are we are willingly helping this surveillance? Is that phone app really necessary?

A new index released this week offers a sobering look at how democracy is faring in the United States.

According to the 2018 edition of The Economist Intelligence Unit’s Democracy Index, the U.S. doesn’t even make the list of top 20—its demonstrably “flawed democracy” notching it the 25th spot.

The ranking is based on 60 indicators spanning five interrelated categories: electoral process and pluralism; civil liberties; the functioning of government; political participation; and political culture. Each category gets a 0-10 score, with the final score being the average of those five. More…