See You On The Dark Side Of The Moon

[Social]
See You On The Dark Side Of The Moon
by James Quinn
Posted January 22, 2020

Let’s face it, “THEY” don’t want the masses to think. They don’t want them to make choices which will free them from working from sun up until sundown until they die. The corporate fascists want you to die at your desk or, even better, develop a disease the sickcare complex can milk for hundreds of thousands of dollars. It’s all about the dollars.

They want it all and we are just the dupes, following their directives, and working ourselves to death trying to keep up with the Joneses. Striving to make the most money, own the biggest house, driving the most expensive automobile, and riding the biggest wave is a recipe for an early grave. What’s the point, as we are all dust in the end.

We all have both good and evil within our hearts and have the choice to let one or the other dominate our thoughts and actions. Each person on this earth has the option of following an ideology of evil or an ideology of good. When enough people choose to believe in the messages coming from dark forces, the result is tragedy and the loss of millions of lives, as we have seen in the last century under the rule of Stalin and Mao. More…

Who Are The Globalists And What Do They Want?

[Social] [Media]
Who Are The Globalists And What Do They Want?
by Brandon Smith
Posted January 18, 2020

We talk a lot about the “globalists” because frankly, their agenda has become more open than ever in the past ten years. There was a time not long ago when the idea of the existence of “globalists” was widely considered “conspiracy theory”. There was a time when organizations like the Bilderberg Group did not officially exist and the mainstream media rarely ever reported on them. There was a time when the agenda for one world economy and a one world government was highly secretive and mentioned only in whispers in the mainstream. And, anyone who tried to expose this information to the public was called a “tinfoil hat wearing lunatic”.

The argument on whether or not a globalist agenda “exists” is OVER. The liberty movement and the alternative media won that debate, and through our efforts we have even forced the establishment into admitting the existence of some of their plans for a completely centralized global system managed by them. Now, the argument has changed. The mainstream doesn’t really deny anymore that the globalists exist; they talk about whether or not the globalist agenda is a good thing or a bad thing. More…

When the value of Apple and Amazon soared above one trillion dollars they became the first companies to reach this milestone. It is difficult to deny that in our modern world many large companies already have more power than most nations and their power continues to grow at an alarming rate. In the past, it was large oil conglomerates that held the power but today much of it has shifted to technology companies. This power is reflected in companies ability to bend regulations in the area of trade, in some ways, the anti-globalism movement could be viewed as an attempt to halt large companies in their tracks. This is one of the reasons anti-globalist and those wanting more limits of trade have rushed to embrace the use of tariffs.

For years many economists have discounted the implications and disregarded how the greed of these companies have added too many problems in the world. For example, if it is bombs you want, they will gladly make them for you, and while doing this they gain power and add to their profits. This train of thought brings front and center the question of whether mega-global companies are working in the direction of taking over the world and even dominating governments and countries. This is in some ways an extension of the New World Order with CEOs pulling the strings. The power they wield is often masked behind the facade of a figurehead leader but it is very real. More…

The Facts:
It is difficult to deny that in our modern world many large companies already have more power than most nations and their power continues to grow at an alarming rate.

How to Survive Solitary Confinement With a sigh, Johnny Perez rises from his plastic chair, unfolds his lanky frame and extends his wingspan until the tips of his middle fingers graze the walls. “It was from here to here,” he says. “I know because I used to do this all the time.” Until recently, these measurements—10 feet by 6 feet—fit his entire life.

Two years ago, Perez was released on parole after serving 13 years at Rikers Island penitentiary and prisons in upstate New York, three of which he spent in solitary confinement.1 Sitting across from Perez, you wonder how he feels in this space, a tiny, harshly lit conference room at the Urban Justice Center on Wall Street in Manhattan. Whether it brings back traumatic memories, or feels like home, or both. More…

As new studies continue to point to a direct link between the widely-used glyphosate herbicide and various forms of cancer, the agribusiness lobby fights ferociously to ignore or discredit evidence of human and other damage. A second US court jury case just ruled that Monsanto, now a part of the German Bayer AG, must pay $ 81 million in damages to plaintiff Edwin Hardeman who contracted non-Hodgkin’s lymphoma cancer. The ruling and a line-up of another 11,000 pending cases in US courts going after the effects of glyphosate, have hit Bayer AG hard with the company announcing several thousand layoffs as its stock price plunges.

In a trial in San Francisco the jury was unanimous in their verdict that Monsanto Roundup weed-killer, based on glyphosate, had been responsible for Hardeman’s cancer. His attorneys stated,

“It is clear from Monsanto’s actions that it does not care whether Roundup causes cancer, focusing instead on manipulating public opinion and undermining anyone who raises genuine and legitimate concerns about Roundup.” More…

Finland is the only EU country where homelessness is falling. Its secret? Giving people homes as soon as they need them – unconditionally.

It is important that they are tenants: each has a contract, pays rent and (if they need to) applies for housing benefit. That, after all, is all part of having a home – and part of a housing policy that has now made Finland the only EU country where homelessness is falling.

When the policy was being devised just over a decade ago, the four people who came up with what is now widely known as the Housing First principle – a social scientist, a doctor, a politician and a bishop – called their report Nimi Ovessa (Your Name on the Door).

“It was clear to everyone the old system wasn’t working; we needed radical change,” says Juha Kaakinen, the working group’s secretary and first programme leader, who now runs the Y-Foundation developing supported and affordable housing. More…

The Short Road: Democracy to Fascism 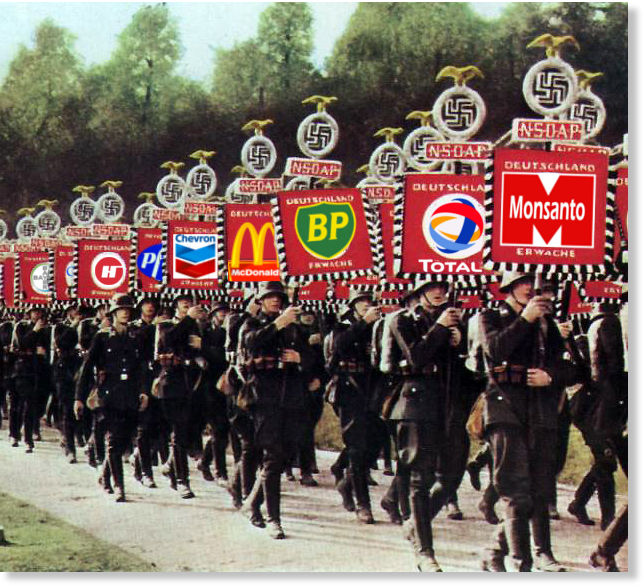 Fascism is a political ideology fundamentally authoritarian in character, with a strong nationalism and an essentially belligerent militaristic outlook. Fascism carries primarily a corporate perspective as opposed to a socialist view, directed to satisfying the needs, values and objectives of finance and corporations, organising both the economy and the political system according to this agenda.