Building the Commons as an Antidote to the Predatory Market Economy

Building the Commons as an Antidote to the Predatory Market Economy
by Margaret Flowers and Kevin Zeese
Posted September 6, 2013

These are times of radical change. We are in the midst of an evolution. As David Bollier writes, “We are poised between an old world that no longer works and a new one struggling to be born. Surrounded by centralized hierarchies on the one hand and predatory markets on the other, people around the world are searching for alternatives.”

We are at a crossroads in the global economic order. If not stopped, the two massive “trade” agreements under negotiation at present, the Trans-Pacific Partnership (TPP) and the Trans-Atlantic Trade and Investment Partnership (known as TAFTA), will cement this globalized neoliberal market economy through greater deregulation, profit protection and an extra-judicial trade tribunal in which corporations can sue sovereign nations if their laws interfere with profits. More…

We’re Hooked on ‘Growth,’ But It Doesn’t Have to Be This Way

As the New York Stock Exchange reached an all-time high this month, you’d think that the good times were back. But that would be incorrect. What happens on Wall Street has very little to do with what’s going on in the real economy. Corporate profits have never been higher, but — excluding the highest earners — real wages are at a 40 year low. With this fundamental disconnect — and political gridlock in Washington — it’s unlikely that our economy will return to health anytime soon.

The good news is that in thousands of communities across America, people are working together to bring about what may be the beginning of a new national economic contract. Where Washington and Wall Street are falling down citizens are banding together, not just to ameliorate the suffering caused by national stagnation, but to launch innovative economic initiatives that might create a brighter, fairer future for everyone. More…

Yet another disturbing reason has emerged as to why you should be avoiding health-devastating genetically modified organisms, and it may be one of the most concerning yet. We know that GMO consumption has been linked to a host of serious conditions, but one thing we are not so sure about is the recent discovery of a hidden viral gene deep within genetically modified crops.

For years, GMOs have been consumed knowingly and unknowingly around the globe, with Monsanto and the United States government claiming that the altered franken crops are perfectly safe despite very limited.

According to Independent Science News, Gene VI also inhibits RNA silencing. As you may know, RNA silencing has been pinpointed as vital for the proper functioning of gene expression when it comes to RNA. Perhaps more topically, it is a defense mechanism against viruses in plants and animals alike. On the contrary, many viruses have developed genes that disable this protective process. Independent Science News reports that the Gene VI is one such gene. More… 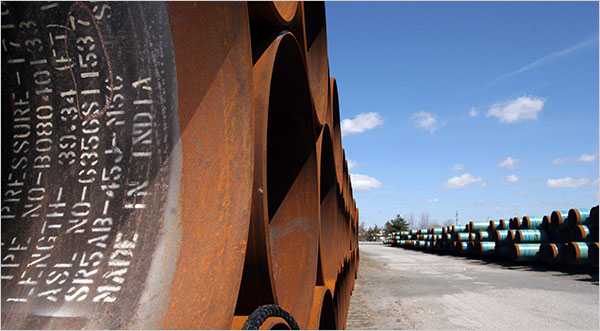 TransCanada has a government in place that had a growing track record of reducing regulation, loved profit, cozied up to corporate influence at will, and increasingly ignored the good of its people. America. So, TransCanada’s lobbyists went to work in the halls of the US congress, and the Office of the President. Current results indicated past success.

TransCanada must have found the political environment of an American government very reassuring, since TransCanada almost immediately began clearing, fraudulently, a path of non-opposition for their new pipeline. Four years hence, TransCanada’s lobbying at the White House would pay off handsomely as scheduled.

Without any legal federal, state, or local approval at all, TransCanada began a campaign of contacting all property owners along the proposed KXL route. Initially, TransCanada started with a letter fraudulently telling landowners that the KXL pipeline had been approved by the federal government, and that TransCanada had the legal right to seize their lands for the pipeline’s path using Eminent Domain, unless” they cooperated. TransCanada knew they were stretching the truth to shreds, but had the confidence to lie and coerce the landowners into submission. This fraud cost TransCanada almost nothing and yielded great success amongst the landowners who fell for their line and signed an Easement Agreement. More…

If anyone has bought the corporate media propaganda that this oil will help make the U.S. more energy independent, ask yourself this question:

Why doesn’t the pipeline run to closer refineries in places like North
Dakota? This is because this oil is destined for EXPORT, and therefore needs the ports located on the Gulf coast.

Limits to Economic Growth, Humanity Is Still on the Way to Destroying Itself

Limits to Economic Growth, Humanity Is Still on the Way to Destroying Itself
by Raul Meijer
Posted January 4, 2013

There is a more or less general recognition that we face three global problems/crises. Finance, energy and climate change. Climate change should really be seen as part of the larger overall pollution problem. As such, it is closely linked to the energy problem in that both problems are direct consequences of the 2nd law of thermodynamics. If you use energy, you produce waste; use more energy and you produce more waste. And there is a point where you can use too much, and not be able to survive in the waste you yourself have produced.

It may be good to remember that one of the basic tenets of the Limits to Growth report was that variables like world population, industrialization and resource depletion grow exponentially, while the (techno) answer to them grows only linearly. More…