A train ride we took on Monday – the Acela Express from Baltimore to New York – was subsidized by taxpayers from all over the country.

In between is nothing but poverty and dereliction. There are factories that last made a product in the ’50s. There are workers’ houses almost unchanged in half a century. There are abandoned warehouses… wrecked cars… junk steel… and burly men in orange vests working with machines.

The middle is where real work was done and real things were made, shipped, and distributed; it shows few signs of growth or prosperity. More… 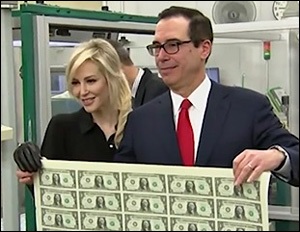 U.S. Treasury Secretary Steven Mnuchin appears to have inaugurated a perpetual bring your wife to work day. It’s become so farcical that it frequently feels like the United States Treasury Department has morphed into a low-budget, badly scripted reality TV show where the female star is so out-of-touch that she must continually scurry about in her haute couture erasing the haughty things she has written about the little people on multiple continents.

While Mnuchin was CEO, a OneWest vice president admitted in a court proceeding to ‘robo-signing’ upward of 750 foreclosure documents a week. She spent less than 30 seconds on each, and in fact, she had shortened her signature to speed the process along. Investigations found that the bank frequently mishandled documents and skipped over reviewing them. All it took to plunge families into the nightmare of potentially losing their homes was 30 seconds of sloppy paperwork and a few haphazard signatures. More…

Pawns in the Game 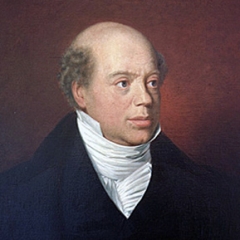 Robert L. Owen, former chairman, Committee on Banking and Currency, United States Senate, states that when associates of the Rothschild’s asked [Benjamin] Franklin how he accounted for the prosperous conditions prevailing in the colonies, he replied : “That is simple — In the Colonies we issue our own money. It is called Colonial Script — We issue it in proper proportion to the demands of trade and industry.”

Robert L. Owen remarked that not very long after the Rothschilds heard of this they realized the opportunity to exploit the situation with considerable profit to themselves. The obvious thing to do was to have a law passed prohibiting the Colonial officials from issuing their own money and make it compulsory for them to obtain the money they required through the medium of the Banks. Amschel Mayer Rothschild was still in Germany but he was supplying the British Government with Mercenary Troops at £8 per man. Such was his influence that in 1764 he succeeded, through the Directors of the Bank of England, in having laws passed in accordance with his dictates.

The authorities in the Colonies had to discard their Script money. They had to mortgage the Colonial assets and securities to the Bank of England in order to borrow the money they needed to carry on business. Referring to those facts Benjamin Franklin stated. “In one year the conditions were so reversed that the era of prosperity ended, and a depression set in, to such an extent that the streets of the Colonies were filled with unemployed.” Franklin stated : “The Bank of England refused to give more than 50 per cent of the face value of the Script when turned over as required by law. The circulating medium of exchange was thus reduced by half”.[1] More…

Financial Tyranny: ‘We the People’ Are the New Permanent Underclass in America

[Social]
Financial Tyranny: ‘We the People’ Are the New Permanent Underclass in America
By John W. Whitehead
Posted December 6, 2017

Americans can no longer afford to get sick and there’s a reason why.

That’s because a growing number of Americans are struggling to stretch their dollars far enough to pay their bills, get out of debt and ensure that if and when an illness arises, it doesn’t bankrupt them.

This is a reality that no amount of partisan political bickering can deny.

A man holding one of the most important and powerful jobs for keeping the U.S. banking system safe from another epic crash like that of 1929 and 2008 has tongues wagging over the bizarre speech he delivered at the Clearing House Annual Conference last Wednesday in New York.

Keith Noreika is the acting head of the Office of the Comptroller of the Currency (OCC), the Federal agency responsible for supervising national banks and inspecting them for safety and soundness.

What Noreika recommended last Wednesday, however, would make the U.S. banking system significantly more dangerous than it already is. Noreika thinks there is no good reason to prevent giant corporate conglomerates from owning insured depository banks that are backstopped by the U.S. taxpayer. Noreika must have spent the last nine years in a coma from which he has just emerged with this insane epiphany. More…

Trump Now Says Wall Street Is the Victim, Not the Villain

[Economic]
Trump Now Says Wall Street Is the Victim, Not the Villain
By Pam Martens and Russ Martens
Posted December 1, 2017

“Populist” candidate for President, Donald Trump, railed against the “political establishment” and Wall Street elites who were “getting away with murder.” On October 26, 2016, just days before the Presidential election, Trump spoke at a rally in Charlotte, North Carolina and promised to uphold the plank in the Republican Party platform to break up the big banks by restoring the Glass-Steagall Act.

Now, as the sitting President, the former populist candidate has become the embodiment of the political establishment he railed against. He has stacked his administration with former bankers from Goldman Sachs; he has placed deeply conflicted Wall Street cronies in key regulatory posts; and he is promising to roll back critical financial reforms. His Treasury Secretary, Steve Mnuchin, has disavowed any intention to reinstate the Glass-Steagall Act. More…

According to an Institute for Policy Studies (IPS) report titled “Billionaire Bonanza 2017,” America’s 400 richest individuals have more total wealth than the nation’s bottom 64%. The three richest billionaires are wealthier than the bottom 50%. The bottom 1% of Americans have a negative net worth of $196 billion. The top 1% has a combined net worth of $33.4 trillion.

Transferring wealth from most Americans to wealthy elites has been going on for years, a deliberate scheme to concentrate it in the hands of the nation’s privileged class at the expense of most others. More…