If Spending Is Our Military Strategy, Our Strategy Is Bankrupt

If Spending Is Our Military Strategy, Our Strategy Is Bankrupt
by Dr. Mark Mateski
Posted August 2, 2015

Even today, few deny the long arm of US military might. After all, the US military exhausted the Soviet Union, crushed Saddam Hussein, and drove Osama bin Laden’s al Qaeda into hiding.

To what should we attribute these triumphs? Some would say US planning and foresight. Others would mention the hard work and dedication of US soldiers, sailors, and airmen. Still others would point to the application of superior technology. All would be correct to some degree, but each of these explanations disregards the fact that for more than a lifetime, the United States has wildly outspent its military competitors.

US global superiority in military affairs is actually the superiority of a rich kid who thinks he’s really smart but in reality is merely just rich. When the seemingly endless flow of money slows (as it inevitably will), the mask of cleverness will fall. Everyone who resented the kid will be waiting at the edge of the playground for this day of reckoning, and because no one else will have been so dependent on spending-as-strategy, the erstwhile rich kid will find it tough going. More…

On 27 August 2012, the Republican commentator, Mike Lofgren, headlined in The American Conservative, “The Revolt of the Rich,” and he dumped upon his fellow conservatives for being now traitors to democracy in America. Anyone who thinks that America is still a democracy, and that the U.S. hasn’t descended into being ruled by the money of billionaire psychopaths in both Parties, needs to see that testimony by this passionate (lower-case “d”) democrat, who “served 16 years on the Republican staff of the House and Senate Budget Committees.” That same month, his stellar book was published: The Party Is Over: How Republicans Went Crazy, Democrats Became Useless, and the Middle Class Got Shafted.

None of this would happen if millions of Americans weren’t very stupid, very full of faith, not science — they’re accepting a Government that will actually produce hell for their own children, and for all future generations. All of this being done to enrich billionaires today. And, to lock in rule by billionaires in the future. Forget equal opportunity — that’s not what an aristocracy wants; that’s what it blocks. More…

Education: the Next Corporate Frontier

Education: the Next Corporate Frontier
by Kristen Steele
Posted July 15, 2015

Over the last thirty years or so, private corporations have been steadily taking over school systems all around the world. Going hand in hand with “free” trade and development, the privatization of education is simply another step towards corporate control of the entire economy. If you’re tuned in to education news in the US, you may be familiar with the public school closures in Chicago, the so-called Recovery School District in New Orleans, and the proposed budget cuts in Milwaukee that have brought parents, students and teachers into the streets.

Privatization exists in different forms, including vouchers, public private partnerships, low-fee private schools, and charter schools. Whatever it’s called, it amounts to the same thing: private corporations gaining control of and profiting from an essential public function. In every country, the identical argument is used: public schools are failing, reform is needed and big business will do it best, providing choice and efficiency. If the statistics don’t match the argument, they are concealed or doctored to fit. More…

If conservatives really want to do away with “wasteful” and “overly bureaucratic” social services in the US – services like Medicaid, Social Security and foodstamps – there’s an easy alternative. It’s simple. It encourages personal responsibility. And it will do away with our current mess of programs that make up our social safety net.

All we have to do is guarantee every person a universal, and unconditional, minimum income. It sounds unusual. It sounds like we’d just be paying people not to work. And why would anyone choose to work if they’re receiving FREE money already? That’s the knee-jerk response – but it doesn’t hold up in real-world experiments. More…

The System Is Broken: Americans No Longer Believe In Its Institutions

The System Is Broken: Americans No Longer Believe In Its Institutions
by Mac Slavo
Posted June 22, 2015

It’s not difficult to see that the foundation is crumbling. A new Gallup poll has found that already low “confidence” in our system of government, our economy, the media, banking, big business, religious institutions and watchdogs is further eroding. “Americans’ confidence in most major U.S. institutions remains below the historical average for each one,” a Gallup spokesman said in a news release.

All in all, it’s a picture of a nation discouraged about its present and worried about its future, and highly doubtful that its institutions can pull America out of its trough. There is plenty of good reason, with evidence uncovered daily, weekly and consistently throughout the years of the hypocrisy and failures of government, the failed promises of politicians, the lies and spin of the mainstream media and newspapers, the greed and exploitation of the financial sector and the “just us” mentality of above-the-law enforcers who are supposed to uphold justice. More…

Financial Predators and Parasites Want to Live, Regardless of the Cost

Financial Predators and Parasites Want to Live, Regardless of the Cost
By Charles Hugh Smith
Posted June 19, 2015 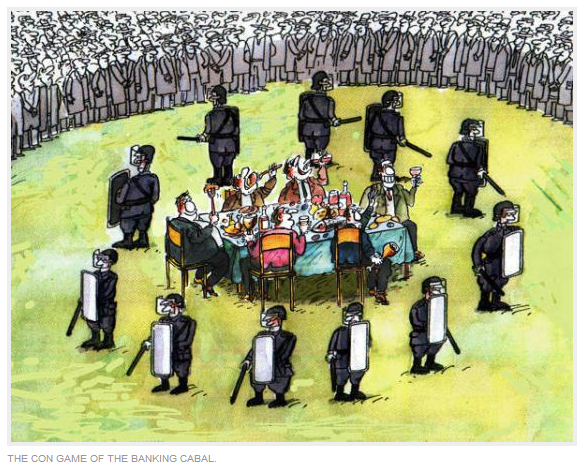 What we’ve done is optimize financial predation and parasitism. We’ve created enormous incentives for too big to fail/jail banks, financiers manipulating dark pools and high-frequency trading that add nothing to the real economy, public unions guaranteeing their members unbeatable pensions and benefits while taxpayers foot the bill, politicos who enter office with ambition and few financial means who leave office with great wealth, cartels that buy protection from competition from the centralized state and corporations that rewrite the tax code in their favor with campaign contributions. More…